To overcome the issue of patients & doctors reaching each other, Village health worker or bare Foot Doctors are developed. MAHAN has given special training to them & keeps their knowledge updated. These tribal female are semi literate or illiterate. You must have read about this in one of our blogs on same website. This model helped to reduce the under 5 children mortality rate by 55%. In addition to other amazing stories mentioned earlier, here are 2 more.
1.       These VHW also give injections also. Till date these VHW has given 2500 injection without  any episode of  injection abscess .
2.       To overcome issue of VHW faces in reading the name of medicine in English, MAHAN has written those in Hindi language. But what about VHW who are illiterate? MAHAN has given them training by which they know which medicine to be given based upon symptoms & these VHW know it by heart. They then ask one of family members or neighbor to find out that particular medicine from Medical kit. Family members or neighbor then read Hindi name of medicine & give it to VHW. This way successful treatment happens.
Posted by MAHAN Trust at 23:15 No comments: 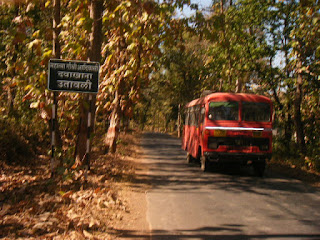 It’s a state highway connecting Amravati (Maharashtra State) & Indore (M.P.).  A bus stops, some patients get down, some get into it. Since last 4-5 years this has become regular picture.  Reason for bus stop is a hospital run by MAHAN trust. For people in cities or small villages, this may be common thing. However in case of tribal of Melghat story is different.
Earlier patients used to walk down or come in bullock cart to MAHAN hospital, you might have seen in MAHAN photo album, uploaded on this site. Subsequently, MAHAN got ambulance donated by state govt. & Mastek foundation. It helped to great extent in carrying patients.
Now it’s a time for further good thing. Fraction in the Govt. body controlling the state transport department voluntarily allotted a stop to all buses on this route, in front of MAHAN hospital. This further increased patient’s convenience. There are fractions in govt. systems who realize the situation & are helping out to make tribal’s life easier. This is one of the good examples of that. We are thankful to them.
Posted by MAHAN Trust at 23:11 No comments: 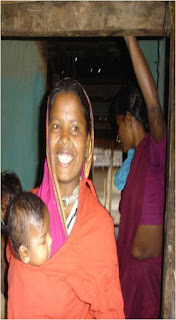 In big cities incubature is not uncommon thing. However this can not be imagined in Melghat, where expert doctor itself is beyond imagination. Also in winter temperature here goes as low as 2-3 Deg Cen. How to save babies in such condition? MAHAN has implemented a innovative idea. It stitched a Kangaroo bag from available clothes as seen in picture. It help to save a children to greatextend. Many such Ideas as small as this, helped MAHAN to achie
ve breakthrough success in reducing mortality rate by > 55%.
Posted by MAHAN Trust at 23:08 1 comment: 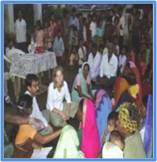 Since last 15 years MAHAN is providing preventive & curative medical services to tribal of Melghat. As around 320 villages are scattered all over Melghat & transportation infrastructure is very poor, it was difficult to reach to population of around 3 lakh. In order to overcome this issues to extend possible, MAHAN has implemented various innovative, unique, low cost models like- Home Based Child Care, Counselor Program, Nutrition (kitchen) garden -Krishidoot, Yuvadoot etc. Still there are lots of things to be done to improve the health facet, livelihood, people involvement & quality of life of people. Keeping this in mind, MAHAN started arranging ‘Jan-Jagrity Abhiyan’-people awareness movement-(as preventive part of medical services) & ‘Gramsabha’-(for non medical social cause) since last 7-8 years.
It includes various activities like-Nutrition Demonstration, Discussions, March, Street plays, Cultural program, Lectures, Basic health education, cleanliness drive (Gram safai) etc. On other side through Gramsabha- people are made aware of their rights, govt. schemes available for them, sharing of success stories of other villages of Melghat, help them to solve their problem which are pending due to systems issues.
It gave good results like- Mobilized government to conduct 'Mutation of land' on massive scale, govt. started State Transport (S.T. Bus) facilities in some parts, Facilitated Employment guarantee schemes, Water supply was arranged, roads are repaired, people are united, Hygiene is improved, addiction is reduced, in addition to improvement on health front.
Posted by MAHAN Trust at 23:05 1 comment: 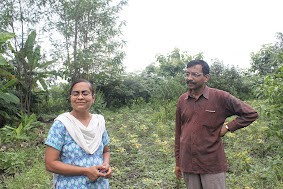 Due to our work, ill elements of society & system whose vested interests got hurt, try to unsettle us form Melghat. Once in January 2012,  I was informed by our lawyer that I will be arrested in couple of days for false conspiracy of murder.  I was shocked to listen it. I could not believe that  system  is so blind.   I was confused whether to inform my wife Kavita or not as she will be shocked by listening this. In next week, on 14th & 15th Jan, we had organised an eye surgery camp where 30 blind and other patients with eye problems were to be operated. All were very poor tribal patients from remote and interior villages of Melghat and surrounding Madhya Pradesh. I thought if  I won’t inform to Kavita & if I get arrested then who will look after medical management of camps & some operated patients who were having some other medical problems also.  So I informed it to Kavita  and asked her either to postpone the camp or shift the patients to Nagpur/ Sevagram  for surgeries . But she was firm. She said -"Ashish, all are poor and cannot afford to go outside for surgeries. Many are blind since many years due to lack of resources. So I will conduct the surgery camp. I will manage the patients even if you are arrested". Her strong will to serve poor patients dominated the fear and she successfully conducted the eye surgery camp giving vision to many poor tribes.Ultimately it was proved that all those allegations against me were wrong and I was not arrested.
I was so satisfied to have such an dedicated and fearless wife. This episode proved that she is the real life partner ready to bear all shocks of my life  with full devotion without any complaints.
Posted by MAHAN Trust at 22:58 3 comments: 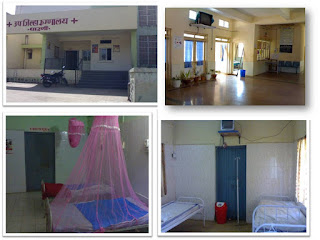 This is a story of how Innovative 'Counselor program' started in Melghat about which you might have read in one of our blogs on this website.  Malnutrition is serious issue in Melghat. Govt. has  declared many schems to solve this issue. As a part of this, collector of Amravati distirct (Melghat is part of Amravati), in 2006,  requested voluntary organizations to facilitate & admit severely malnourished babies in govt. hospital. MAHAN trust admitted 4 severely malnourished babies in 'Tarubanda',(a village place) Sub District Hospital (SDH) Dharni.  On 4th day those mothers left the hospitals with children and told us that they were not cared by doctors and nurses.  So MAHAN investigated the case and found many lacunaes in the govt. hospitals especially communication gap and lack of facilities at govt. hospitals. MAHAN and KHOJ, one more NGO working in Melghat, approached Dr. Mishra (Then, National Human Rights Commission), Divisional Commissioner Dr Goyal and District Collector Dr. Bhapkar.  On our request local tribal youths trained by us, were appointed as counselors in all government hospitals of Melghat  under government and voluntary agencies   paretnership, under our leadership. This helped a lot to in the 'Communication development between doctors and  local community' & 'worked as watchdog on govt. medical systems in those hospitals. It resulted into increased hospitalization & we could save thousands of precisous lives. Probably this is the first innovative program of monitoring of government hospitals by voluntary organisations in India.  You may read more about this on our webpage at "Counselor Program Project".
Posted by MAHAN Trust at 22:54 No comments: 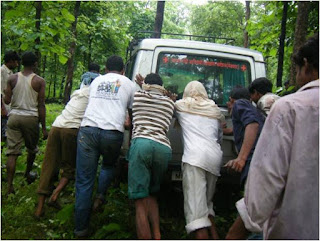 Email ThisBlogThis!Share to TwitterShare to FacebookShare to Pinterest
Story of community awakening

Chitri is a tribal village of Melghat. Once police arrested  and beaten the innocent tribals under suspicion of involvement  in road robbery. When we realised that the tribals were innocent, we guided them and helped them to fight for their human rights by Gandhian way. Due to our help and guidance, the tribals were so motivated that they visited higher police authorities and district administration and informed them about the atrocity on themselves. The higher authorities punished the culprits and saved the innocent tribals of Chitri.
Posted by MAHAN Trust at 05:40 No comments:

Once a tribal came to our eye hospital. He had fully matured cataract in one eye and nearly matured cataract in other.
He had intense desire to get operated. He was operated and his vision was satisfactory after surgery.
Two days of discharged, patient came back with diminished vision with blood in anterior chamber of eye. I was shocked. But after detail enquiry, we came to know that he was injured by a bull while he was putting a rope through the hole in nasal septum of bull.
Emergency eye surgery was carried out by washing the whole blood and clot.  The brownish black iris tissue was in section and the intraocular lens which was implanted was dislodged in anterior chamber. I managed the case and rest was left for  the  almighty god that if retina is good then he will be able to see. There was sigh of relief and  I bowed in-front of god and remembered the saying in Marathi “ Dev tari tyala kon mari”. Then the patient vision become alright and he was discharged satisfactorily.
Posted by MAHAN Trust at 05:35 2 comments: 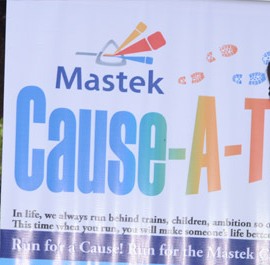 Mastek who is regularly supporting tribal of Melghat & MAHAN, had recently organized a Walkathon, on 23rd Mar 2013 in Mumbai. It was organized to raise the awareness among its employees, their families, customers, vendors, associates etc., about Melghat tribal & service MAHAN is providing.

It is really unbelievable & pleasant that a corporate organization organized walkathon (which they wonderfully renamed as ‘causethon’) for a single NGO. I, on the behalf of MAHAN, am really thankful to them all for trust they have shown on us & in our work.
We can say proudly that MAHAN & tribal of Melghat have one more an extended caring family in Mumbai. We are more than happy & motivated to see this long term relationship touching new height every time.
Our special thanks to Mr. Sudhakar Ram sir for his patronage, Mr. Sanjay Mudnaney for taking efforts to organize this event, efforts to understand our needs time to time & supporting MAHAN on various fronts, Preethi and  team associated in organizing this event and participating employees & families, customers, vendors, associates whom we consider as a part of Mastek family.
We are thankful to Caring Friends (Ramesh uncle, Nimeshbhai & team) due to whom we could get connected to Mastek.
Every step (of run) is step toward solving problem (of Melghat Tribal)
You may visit Mastek website to get more idea- (page-11) & other pages on Mastek website
http://www.mastek.co.in/images/ArticleBrochures/Environment%20Social%20Report%20LATEST.pdf
Posted by MAHAN Trust at 00:01 No comments: